One of the most disconcerting experiences a plasterer can have is when he does what seems to be a perfectly good job of plastering a pool, only to be called back out to find that the plaster had developed calcium nodules. The terminology: (this phenomenon has variously been referred to as calcium growths, nodules, or nodes, spores and effervescence. Despite the term used, the result is the same; a localized, raised concentration of calcium carbonate, either in the classic “volcano” configuration or in the “stalactite” drips, emanating from a crack or a pinhole in the plaster). 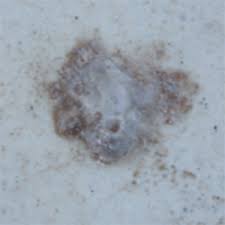 Although in times past some have attempted to associate nodules with the general chemistry of the pool water, research has shown that the cause of nodule formation is cracking (from over-drying of the plaster) or bond failure (aka delamination), which occurs primarily in re-plastered pools.

In order to understand the process of nodule formation it can be helpful to consider what happens when you first fill a plaster pool with water. As the plaster hydrates (cures) chemical reactions take place which result in the release of soluble calcium into the pool water. This calcium, in the form of calcium hydroxide (Ca(OH)2), has a very high pH, which in turn raises the pH of the entire body of water in the pool. The soluble calcium hydroxide reacts with the bicarbonate (HCO₃-) part of the pools alkalinity in the water and converts to a non-soluble form called calcium carbonate (CaCo₃), which is precipitated throughout the pool in a powder commonly referred to as plaster dust. The plaster dust is brushed and filtered, removing it from the pool. Calcium that still resides in the water once normal pH levels are achieved tends to be calcium bicarbonate (Ca(HCO₃)₂), another soluble form of calcium.

Hollows in the Plaster:

In spite of the best care a plasterer may take, there are times when cavities or voids are present in the plaster. These voids may be the result of shrinkage cracks, hollows between fixtures and plaster, or the lack of a good bond between the plaster and the underlying base material. (This lack of bond is referred to as delamination or bond failure). Delaminated areas can be small (2-3 inches in diameter) or very large (3-4 feet or more). If the void is never exposed to water, the sequence for creating a nodule stops. If, however, water can enter the void through a connecting path (usually either a crack or pinhole, depending on the shape of the delamination and the nature of the flexural force involved), the sequence continues. Depending on when the path is opened, voids in plaster may become filled with water as soon as the pool is filled, or they may not fill with water until months or years have passed. Voids may even develop after time, if delamination occurs due to ground shifting or other extraneous forces.

Regardless of whether the void is filled with water immediately or down the road, the process of hydration will occur inside the void just as it did out on the face of the pool when it was new. Only this time the calcium hydroxide is temporarily trapped, allowing it to concentrate – creating a strong, localized body of the material from which a nodule can be made. But it then travels out to the main body of water in the pool where it can react with alkalinity to transform into calcium carbonate. Where does this conversion to non-soluble calcium occur? In our plaster dust example, the conversion occurred uniformly over the entire surface of the plaster, resulting in uniform fall-out of plaster dust throughout the pool. In the case of super-saturated calcium water oozing out of a pinhole, the conversion occurs just as it exits the void and enters the pool, i.e. on the plaster surface of the pool.

How Does It Squirt Out?

The answer to that question seems to determine whether or not a nodule forms. If the supersaturated water squirts out fast enough, a small amount of plaster dust will form beyond the exit hole, and will disperse into the pool water. This amount is little enough that it is not noticeable. If it oozes out very slowly, it may even solidify in the hole and plug it up. If the speed is just right (or wrong), it will form a nodule around the exit hole.

What about those who claim that “aggressive water” causes Nodules?

It is instructive to consider the case of pools that have been acid washed or subjected to the acid start-up procedure. These pools often have had enough hydrochloric acid added to expose the plaster to a pH of 4.5 and alkalinity level of 0 for over a week. In both cases, the plaster has a better appearance afterward than before, yet the resultant surfaces do not have any greater propensity towards nodules following the acid wash.

What Can Be Done To Avoid Nodules?

The best methods to avoid nodules are nothing new: prepare the surface properly to insure a good bond, use the correct amount of each component of the plaster, mix and apply it correctly, and allow it to hydrate and cure normally. The critical failures include:

–    Weak bonds between the plaster and the subsurface (which explains why nodules are more prevalent in re-plastered work).

–    Over accelerated drying resulting in excessive cracking of the plaster

–    Allowing the pool plaster to become too dry from extended periods of hot periods of the pool not being filled with water.

–    Too slow of filling in a new plaster pool, resulting in shrinkage.

–    Spike holes or other such “artificially created” cavities.

Surface preparation and compatibility of new coatings to existing surfaces is crucial to many other applications besides pool plaster. Anyone who has spent hours or days removing old varnish from furniture or old paint from the eaves of your house prior to repainting is familiar with the concept. Those who are even more familiar with surface preparation are those who have failed to properly prepare the surfaces, or to ensure compatibility of a new paint with the old. Bonding plaster to fresh gunite is rarely a problem because there is a chemical bond (where curing plaster chemically “locks on” to curing gunite), in addition to a mechanical bond (where the fresh plaster fills in the intentionally rough surface of the fresh gunite). The “new plaster to old plaster” and the “new plaster to old gunite” combinations are much more difficult. This is because in these situations no chemical bonding is likely, due to the fact that the old plaster or gunite is already thoroughly cured or hydrated. This fact has given birth to companies manufacturing, distributing, and instructing plasterers on the use of additional chemical bonding agents.

The Effect of pH on Calcium

Calcium in pools tends to show up in differing forms depending of the pH of the water, as the list illustrates:

How Can I Remove Existing Nodules?

If there is not an excessive number of nodules, our experience with this problem is that the best way to treat a nodule is to let it exhaust itself normally. Just as plaster dust formation stops when the normal amount of calcium cures out of the surface, a nodule will cease growing when a proportional amount of calcium cures out of the void. A nodule can be scraped or sanded from the surface, and will only continue to reappear until all of the calcium from the source has been exhausted. Sometimes one removal will suffice, and other times it takes 2, 3, or more removals. The number of times it re-grows and the size of the growth can be an indication of the amount of plaster surface inside the void.

Swimming pool plaster coming away from the Shell 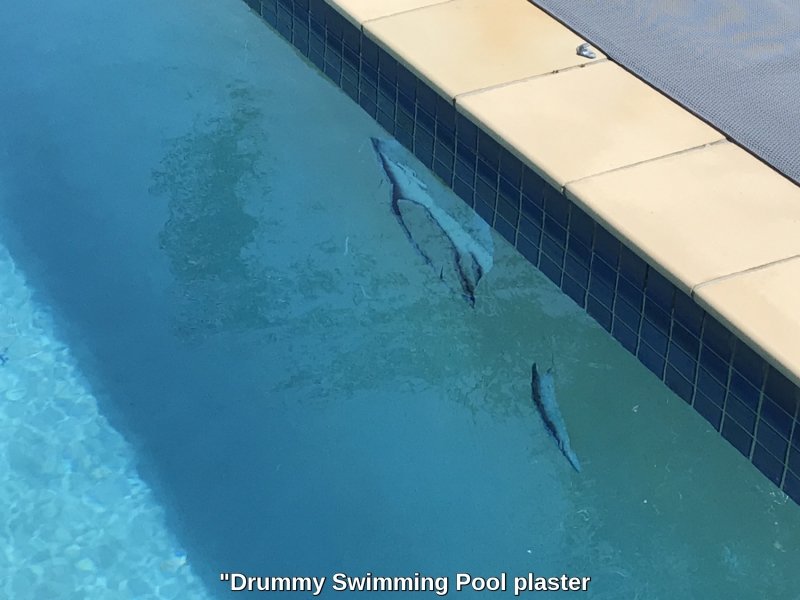 This is what happens over time if swimming plaster does not adhere ( stick to ) to the concrete swimming pool shell. With this scenario you will find plenty of other areas on the shell plaster that will do the same, it is but a matter of time now.  This shell needs to be stripped back to the bare concrete shell and prepared properly, then a new plaster job should be carried out. An expensive repair.